At Greeley Hat Works, every employee is a part of the family. From the salespeople, to designers, to the artisans making the hats, every single person at this company is a valuable part of the equation. Fia Lotsu has been working with Greeley Hat Works since 2017, and she sat down for an interview about her time here so far:

GHW: So, what do you do here at Greeley Hat Works?

Fia: Basically anything that needs to be done. I end up doing a lot of the specialty trim, so like the Jarvis stitching and putting on the rhinestones. I do a lot of hand sewing. Basically all of the strange stuff, haha.

GHW: Were you a seamstress before you came to Greeley Hat Works?

Fia: No, I had done a little bit of sewing – I took a class in high school. But, I do a lot of craft projects on my own, so I’ve done a lot of hand sewing and it just kind of worked out nicely.

Fia: The one thing about hats, since they have a definite shape, is working in 3D versus just working on something flat. So that took a little bit of getting used to.

GHW: What’s your favorite part of the job?

Fia: I like seeing the finished product. When I’ve been working on a hat for hours and hours and then all of a sudden it all comes together and it becomes a cool piece that someone’s going to wear.

GHW: Have you gotten to style any of the hats with your own “Fia flair”?

Fia: Haha, not too much yet. I’m looking forward to being able to doing that!

GHW: Do you have a favorite kind of hat to work with?

Fia: I really enjoy working with the new Nine7O hats because they’re a little bit funky and different – something other than just cowboy hats. I enjoy seeing the different styles. I like the Double D Ranch hats as well. The different styles are all fun to work with. 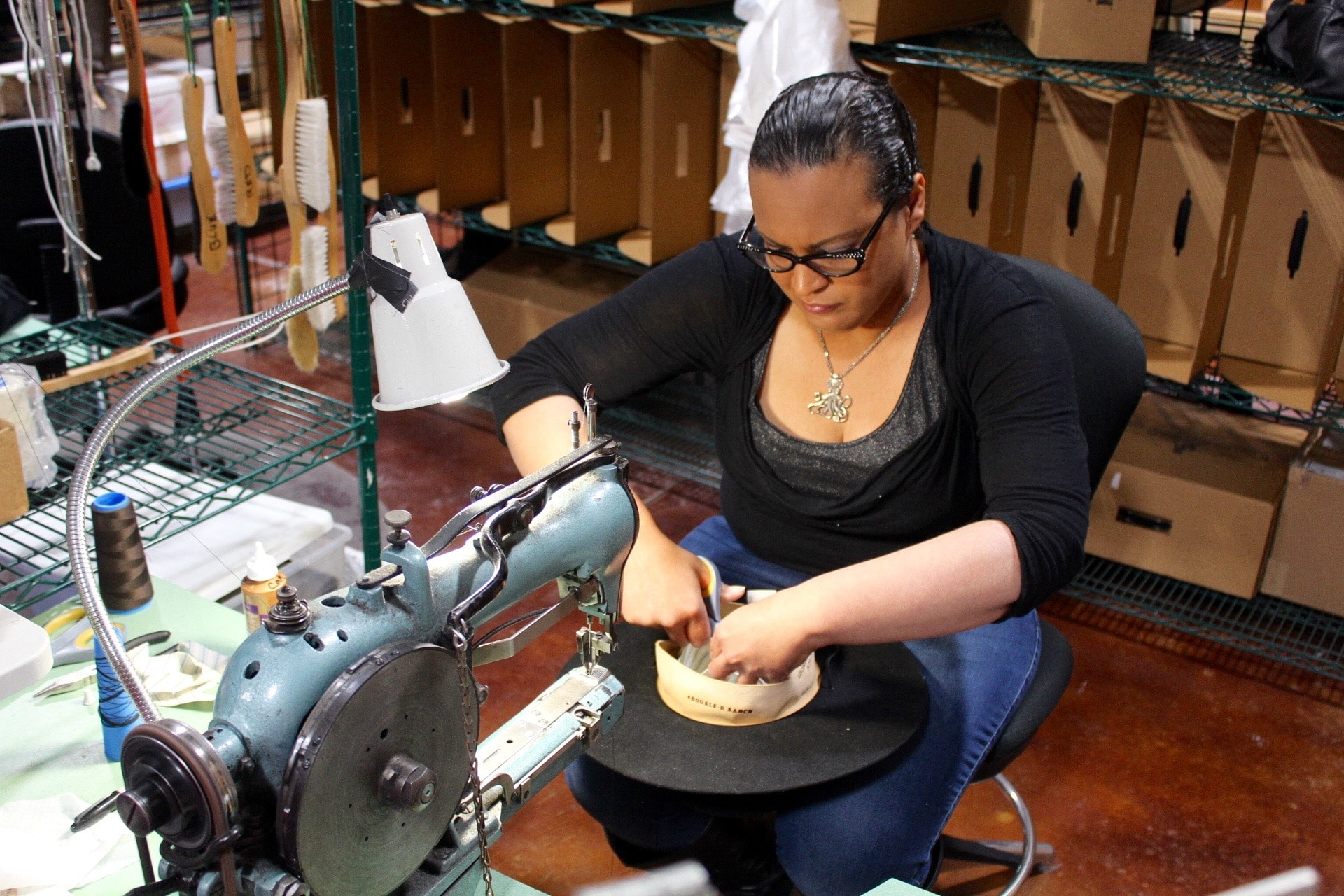 Fia has a great work ethic. She's very detail-oriented and fun to be around. - Trent Johnson, Owner

GHW: How did you find out about Greeley Hat Works?

Fia: Several years ago, I actually worked for a costume shop in Fort Collins and got really into costuming. From there I got into millinery (hatmaking). So I actually made a 19th century riding hat that was completely lined, inside and outside. It was a really fun project to work on, and I was just doing it for fun, for my own interest. I also got into collecting vintage ladies hats. I had met Damon, our production manager, through the music scene in Fort Collins and he told me he worked in a hat shop. I ended up taking a tour of Greeley Hat Works and I thought, “This place is so cool! I wanna work here.” And I just told him, “Let me know if you have an opening, because this is a place where I’d really be interested in working.” And lo and behold, he gave me a call when they had an opening and here I am!

GHW: What kind of ladies hats do you collect?

Fia: Mostly the smaller ones from the 50s.

GHW: That’s about the time Jackie O and Kennedy messed everything up for the rest of us!

(More on THIS topic in a later blog post.)

GHW: What’s the hardest part of your job?

Fia: There are a lot of details. Depending on who you’re making hats for, there are just a lot of things to pay attention to so you make sure that you get every order correct. That can be a bit challenging. Each company that we make hats for has a card that has instructions on it so that we can make the same hat consistently for them. So, the first thing you do is pull out the card and figure out what needs to be done. Make sure you get the right buckle, and the right liner, and everything like that. It makes it easier.

GHW: Thanks so much for sitting down with us! Anything else you’d like to add?